This is a part of a bigger series I'm writing on archiving media in general.

I've spent the past few weeks at my parents' house and wanted to use the time to digitize and catalog old pictures and videos that they have, to make sure they don't get lost or unreadable some time in the future. I found a box full of old MiniDV cassettes and took the challenge to capture them all. 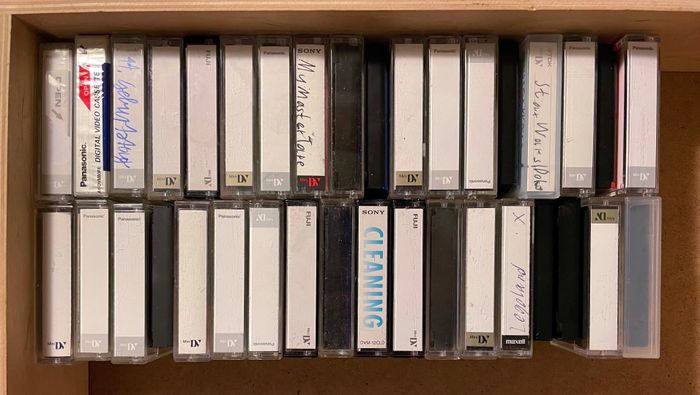 I had three requirements for the process:

This sounded easy at first, but there were a few hurdles to overcome:

It's been a long time since I last used a camcorder and I think I threw my old one away a few years ago after the screen broke. Used MiniDV camcorders are surprisingly expensive and I didn't want to put too much money into this.

Luckily, a good friend of mine still has an old MiniDV player that he could lend me for a few weeks – the Sony GV-D1000E (PAL).

Connecting Mini FireWire to a modern MacBook with only USB-C ports takes a few adapters to achieve:

You could also go directly from FireWire 800 to Mini FireWire, but I already had a 400 -> Mini cable, so I went the longer route. 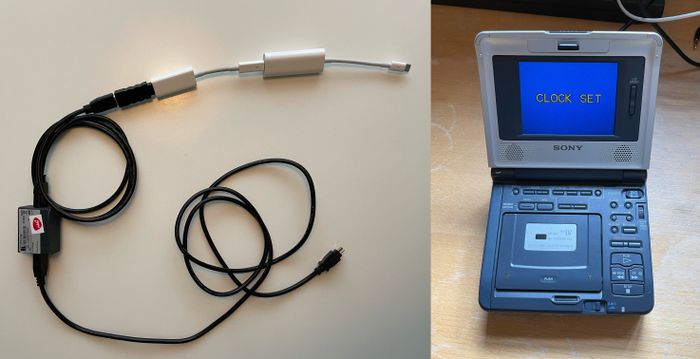 The little box in the image is a DV Line Protector that prevents power spikes from frying the connected hardware. Even though that's a long chain of adapters, the connection is stable and the player was recognized correctly after plugging it in.

You can skip this section if you want to get straight to my solution.

Here's where it got a bit tricky. MiniDV is an old and outdated standard, so there is not much active software development going on around it. I tried a few programs:

Premiere straight up doesn't support DV on macOS anymore, so no luck.

iMovie and Final Cut support capturing from MiniDV and write the data straight to disk without any modification, but they didn't work out for me for two reasons:

The current QuickTime app allows you to capture MiniDV video, but it applies its own video filters, like deinterlacing, and it doesn't split the video into clips.

This app is developed specifically to capture old MiniDV videos so I had high hopes, but it also detected the clips wrong sometimes and didn't always extract the correct dates.

I concluded that using an app might not be the way to go here, so I looked around the internet and found a project called DV Rescue.

DV Rescue is a project by MIPoPS, the Moving Image Preservation of Puget Sound. They are focused on archival and restoration of MiniDV tapes and have open-sourced their work. Last November, they released a presentation of the project's current state.

Two tools are specifically interesting for our use case:

Both tools don't have a GUI, so we're going to use the Terminal.

To use the tools, make sure that Homebrew is installed, then run the following commands to install them on your machine:

First, check what name your MiniDV player or camcorder is listed as:

In my case, the player is called DV-VCR.

To capture a tape, insert it, rewind it, and then launch this command:

FFmpeg will now capture the raw data stream and write it to the file. I usually just leave this running in the background until the tape is finished.

When the whole tape is captured, you'll have one file that contains the raw data. You can archive this somewhere if you like.

Splitting the Recordings into Clips

To split the recordings into smaller clips, we're going to use dvpackager:

DV Packager will now go over the video file, correct A/V synchronization, and add chapter marks for problematic parts. This process will take a while.

After this step, you can go through the clips and sort out unimportant ones. You could call it a day at this point and save the videos somewhere, but I wanted to store the clips in Apple Photos and save some storage, so I added a few steps.

I wrote some scripts to process the clips that I wanted to add to my library.

Convert the Clips to HEVC

Here's a script that deinterlaces all files in the current directory, converts them into HEVC videos, and adds the recording date to it so that it can be correctly imported into Photos:

You can import the resulting files into Photos or Google Photos and they will be dated correctly, given that your camera's time was set correctly when the clips were recorded.

Just add the Recording Date to the Filename

This might be practical if you want to further process the video before adding it to your library. You could, for example, deinterlace it and upscale it to 1080p with Topas Labs' Video Enhance AI using the Dione Interlaced algorithm with Bottom First field order.

Even though it took some time, I now have a solid process for archiving MiniDV tapes and adding them to my Photos library. There are so many precious moments on there and I'm happy that I invested the time to transfer and catalog them.

If I could talk to my 12-year-old self, I would tell him to not re-use those tapes. It degrades their quality and overwriting means losing the old material. Still, I'm happy with the results.

In the next article I'll be writing about the process of cataloging photos from old hard drives in macOS' Photos app.